15 Facts About “Top Gun: Maverick” That Prove Tom Cruise Doesn’t Need a Green Screen to Do the Job

After more than 30 years, the classic about planes is back. In 1986, we met Pete Mitchell, better known as “Maverick,” one of Tom Cruise’s first starring roles. In the sequel, which is said to have far surpassed the first movie, production surprised us with stunts in crazy places, making us wonder why it all seems so natural. The answer: they’re actually real.

At Bright Side, we love high-altitude experiences, so we buckled up not to be blown away while learning what’s behind the scenes of this fantastic blockbuster.

1. They used real jets instead of CGI 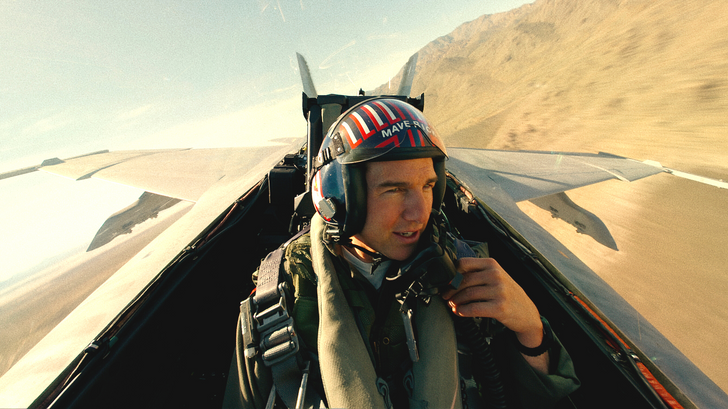 It’s no secret that Tom Cruise likes to do his action scenes, and the Top Gun sequel was no exception. For the actor, the green screen was not an option, as it did not allow him to act out the distortions of the face produced by the force of gravity. For Joseph Kosinski, the film’s director, it was necessary to film the flying scenes in a new way, which led him to find a way to have all the actors film their scenes flying in real jets.

“I told the studio, ’You don’t know how difficult this movie will be. There’s never been an aerial sequence shot this way,’” the actor said.

2. A call from Tom Cruise kicked off production 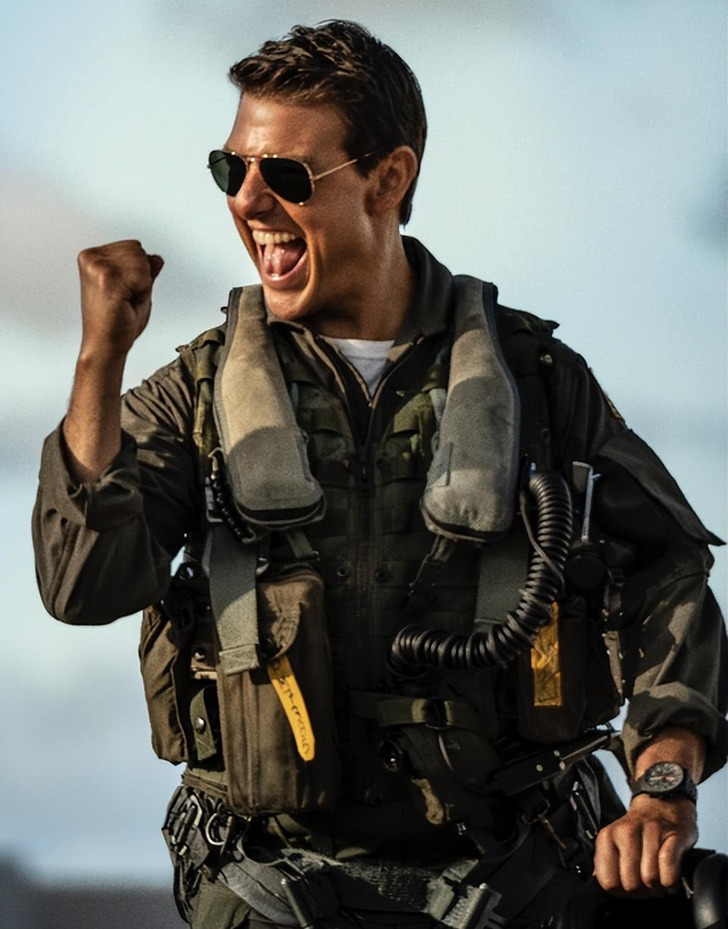 Initially, Tom had no intention of making a sequel to Top Gun. However, Kosinski had an idea in mind for the return of Maverick, and in just 30 minutes, he explained to Cruise his vision for the film. The actor immediately pulled out his phone, called the head of the production house Paramount Pictures and said, “I want to make another Top Gun.” From that moment on, they got down to work. 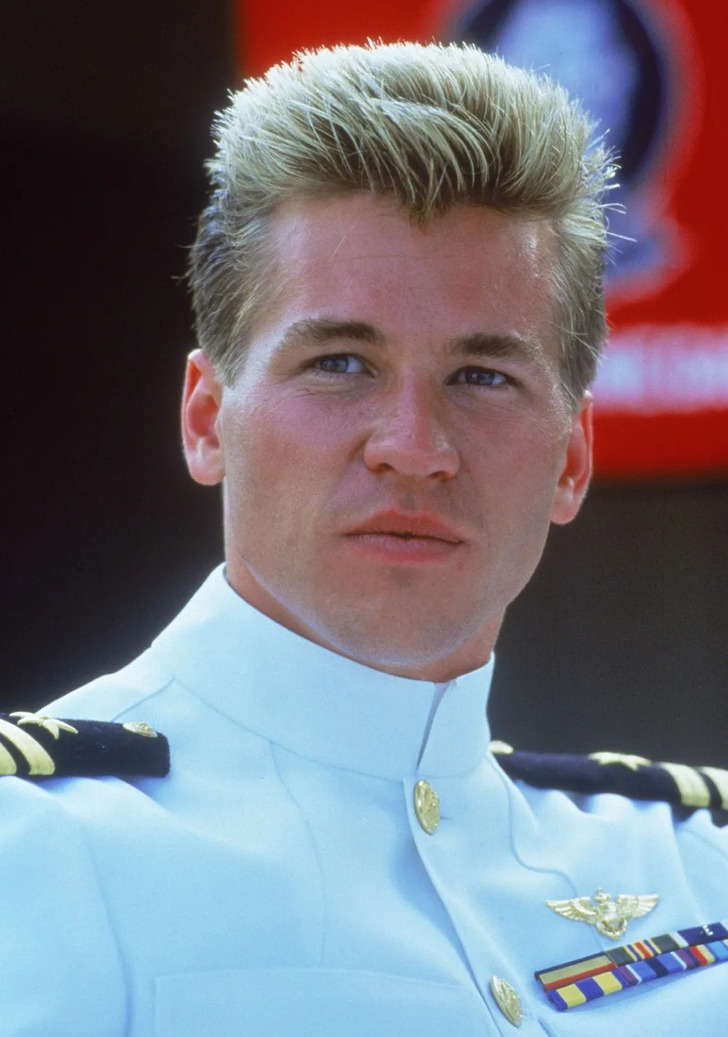 Cruise had one condition for making the film: that Val Kilmer returns to bring “Iceman” to the big screen. “When we filmed, it was a very emotional day to have Val there and to see him working with Tom after 35 years,” the director said.

4. Jennifer Connelly practiced a boating scene on a tabletop. 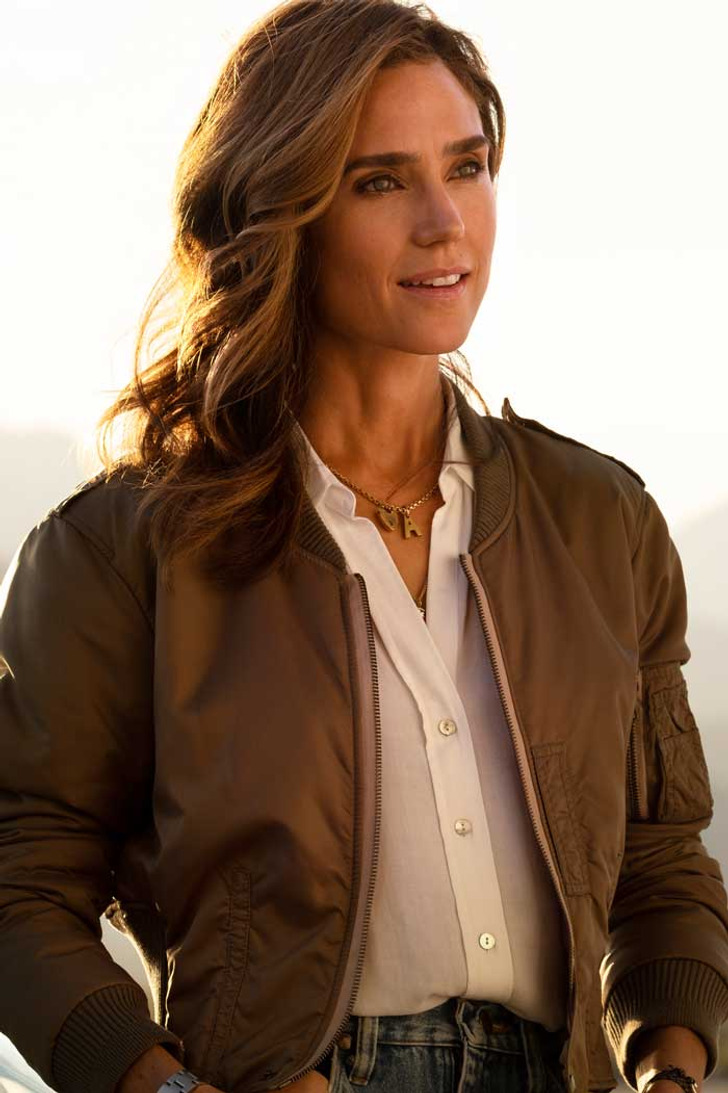 To prepare for a boat scene, the actress practiced standing on a coffee table, with her children spraying and blowing water on her as she went over her lines. This way, she made sure that on set, she wouldn’t forget the script with the distraction of the air and the fast-moving boat (that’s right, the ship was real too).

5. They shot approximately 800 hours of footage 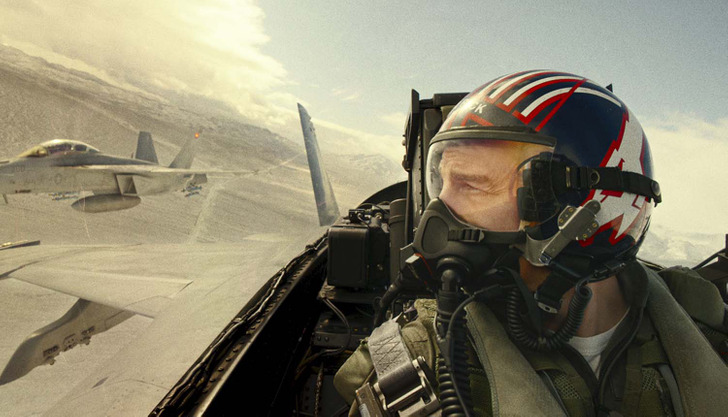 For the sequel to the classic, they had to shoot even more footage than the 3 Lord of the Rings films combined. Joseph Kosinski claimed that out of a 12- to 14-hour day of filming, a mere 30 seconds of good footage was obtained.

“It just took a long time to get it all. Months and months of aerial shots,” he explained.

6. It’s one of the sequels that has taken the longest to be released 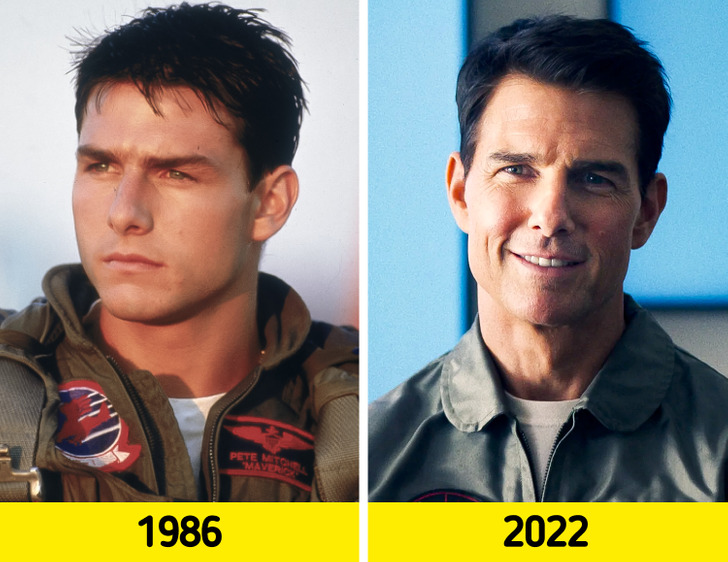 The second installment of Top Gun arrived 36 years after the first film’s release. This is one of the longest periods in cinema history between a movie’s premiere and its sequel.

7. The soundtrack is inspired by ’80s music 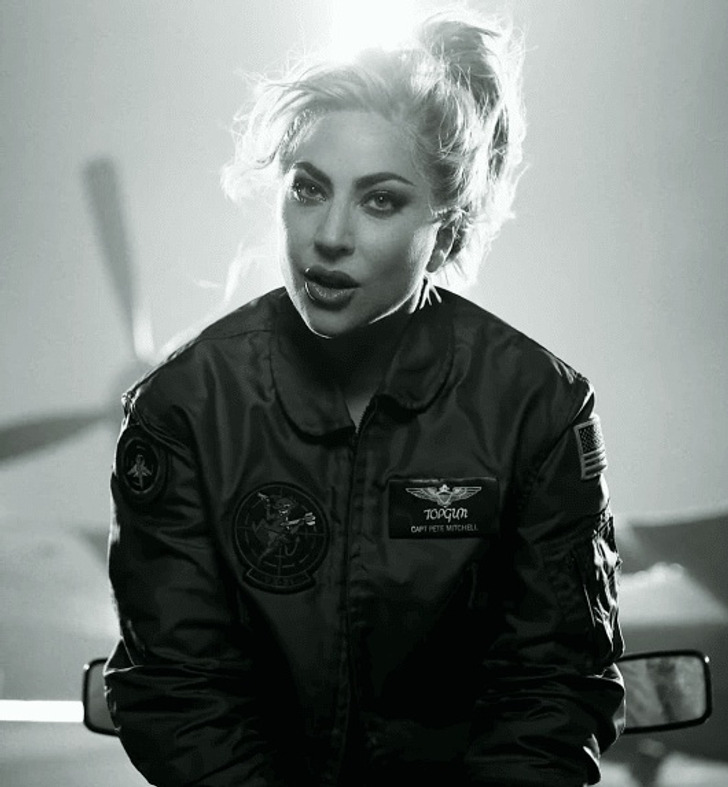 The lead single for the film’s soundtrack was composed by Lady Gaga and BloodPop. The title track is inspired by the sentimental ballads of the ’80s, the decade in which the original film was released. According to the composers, Hold My Hand is a love letter to the world.

8. Only one actress, apart from Tom, did not throw up during the shooting. 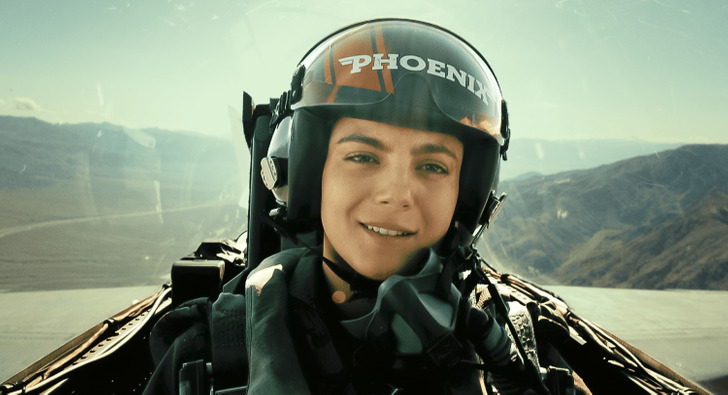 Because the scenes where the actors are inside an airplane were real, almost everyone threw up at some point during the filming of the aerial stunts. According to Jerry Bruckheimer, the producer, there was only one actor other than Cruise who didn’t throw up during filming — Monica Barbaro.

9. Tom flew some of the planes.

In 1994, the actor obtained his pilot’s license, so he could fly some jets and helicopters. During filming, on a few occasions, the actor flew a helicopter to take the director back and forth to the set. In real life, Tom even owns a few aircraft. 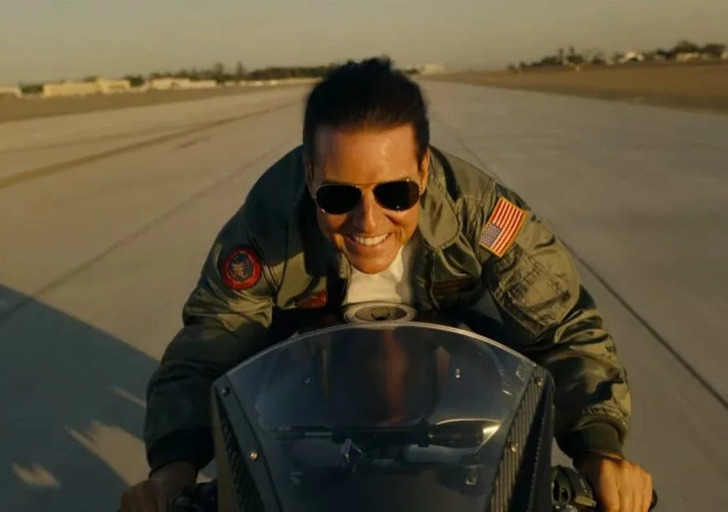 Miles Teller plays Bradley Bradshaw, Nick’s son. Nick was Maverick’s best friend in the original film. For this new character, Teller chose his call sign based on the name of different poultry, as well as Nick’s name. While his dad’s nickname was “Goose,” Bradley’s is known as “Rooster.” 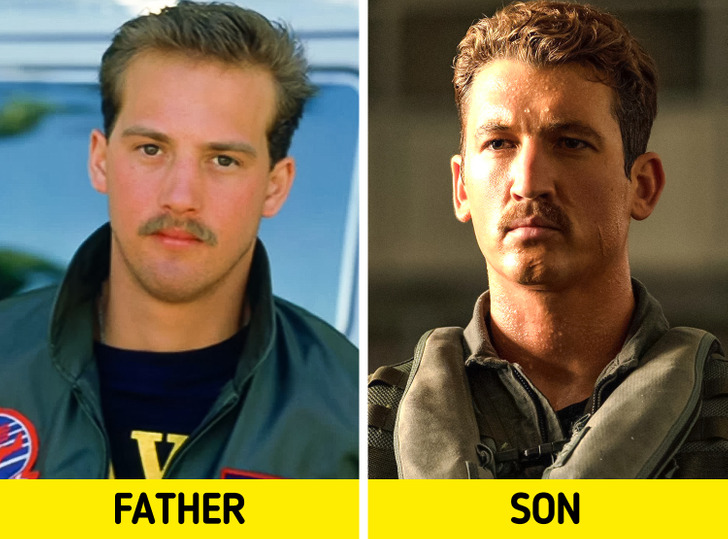 11. Tom Cruise didn’t want a number in the title.

Tom Cruise didn’t think it was needed to have a number in the title of the film. Therefore, instead of going for Top Gun 2, they settled with Top Gun: Maverick. 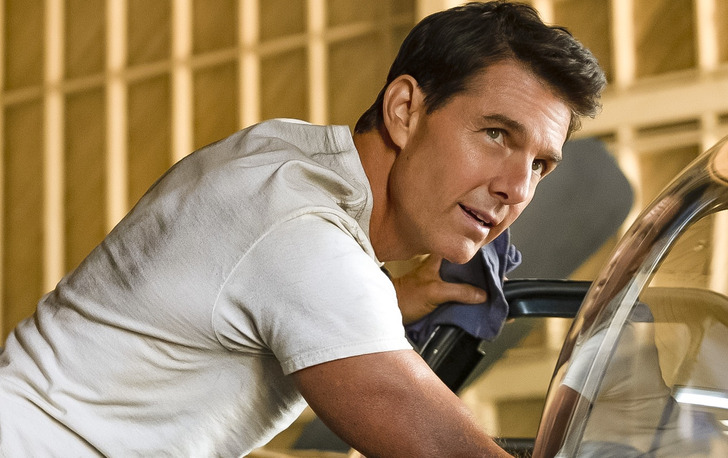 12. They left some blunders on purpose.

As we said earlier, one of the things that makes this film special is that it is filmed in real jets. Because of that, the movie ended up having “imperfections.” For example, there are shots where the camera moves unintentionally or falls out of focus. There are also a few reflections from cameras.

“All that makes it much more exciting, real and human,” said Claudio Miranda, the director of photography. 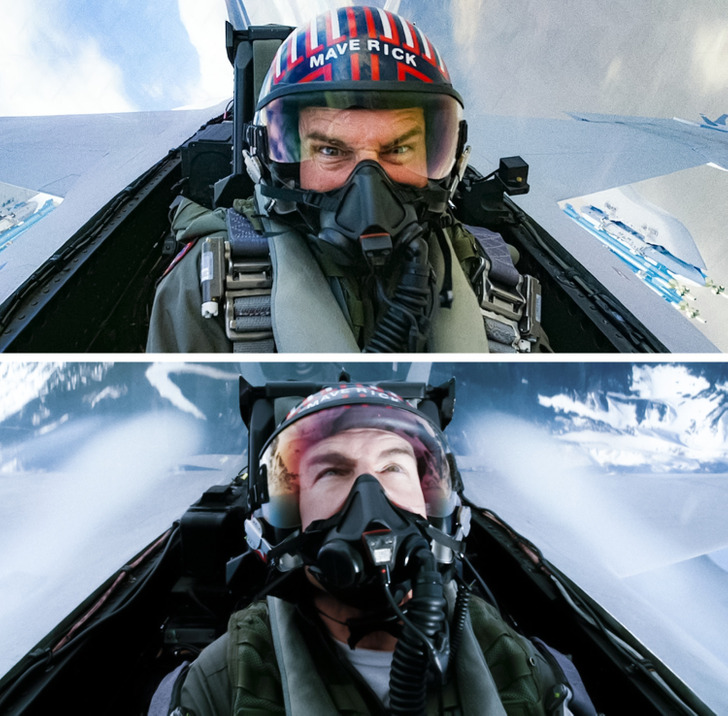 To prepare the actors to perform thousands of feet above sea level, Tom designed a three-month course for himself and his co-stars. That training included practice at different heights, swimming, and learning how to open a parachute before dropping into the pool. 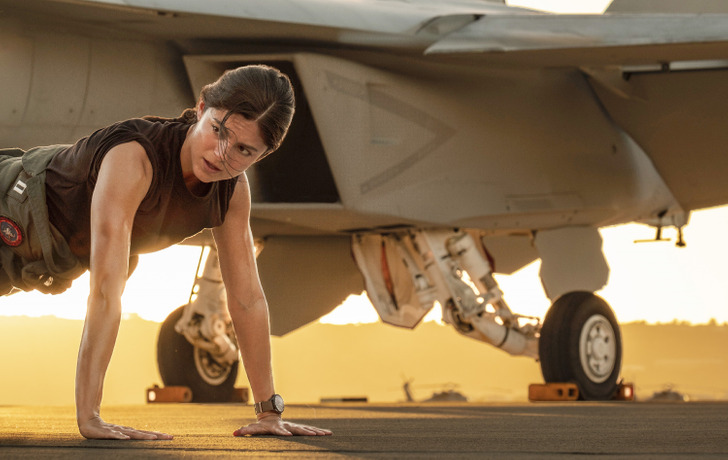 14. This installment bears certain similarities to the original film.

Cruise confirmed that the film has the same tone as the original one. There’s still a need for speed and big airborne machines. This will surely evoke a bit of nostalgia in fans of 1986’s Top Gun. 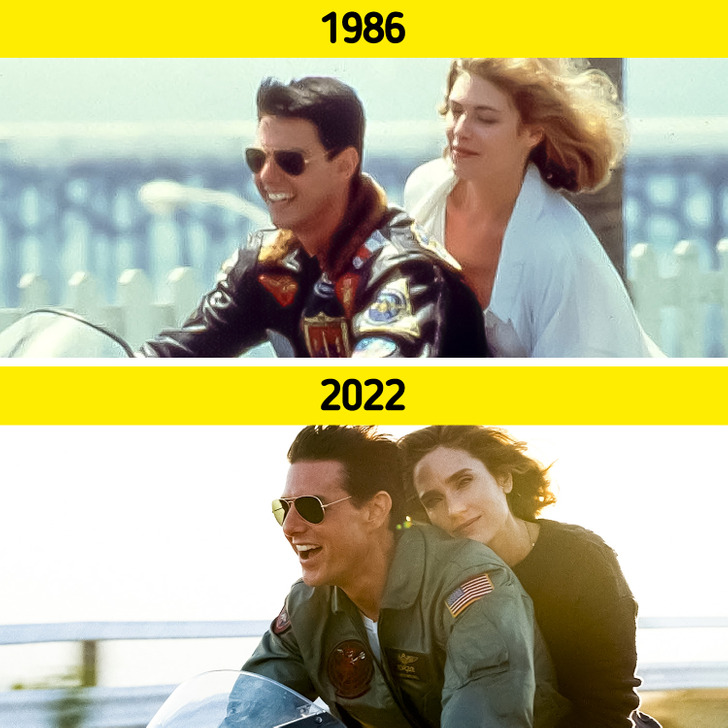 15. It took months to place the cameras on the airplanes

Filming a movie inside a jet is no small feat. That’s why Cruise worked for 15 months with the U.S. Airforces to find the ideal way to place the cameras inside and outside the aircraft without affecting its handling. To do this, the actors had to turn the cameras on themselves, and the director could only review the footage once they landed.

“I really had to teach them cinematography and lighting, so they understood what would look good on camera,” Tom said.